The research endeavours laid out in this thesis set out to address weaknesses of reinforcement learning. As the branch of machine learning that orchestrates a reward-driven decision maker that must learn from its evolving world via interaction, reinforcement learning relies heavily on said reward’s design. Modelling a reinforcement signal able to convey the right incentive to the agent for it to carry out the task at hand is far from obvious, and overall fairly tedious in terms of engineering and tweaking required. Besides, the interactive nature of the domain puts the agent and its world at satefy risk. The longer it takes to iterate over and empirically validate reward designs, the less sensible the suffered costs
gradually become. Imitation learning bypasses this time-consuming hurdle by enticing the agent to mimic an expert instead of trying to maximize a potentially ill-designed reward signal. In effect, the shift from reinforcement to imitation learning trades the reward feedback the agent receives upon interaction off for the access to a dataset describing how an expert decision-making policy — assumed to perform optimally at the task — maps situations to decisions. Depite alleviating the reliance on potentially satefty-critical reward modelling, state-of-the-art imitation learning agents still suffered from severe sample-inefficiency in the number of interactions that need be carried out in the environment.

As such, we first set out to address the high sample complexity suffered by Generative Adversarial Imitation Learning, the state-of-the-art approach to performing imitation (albeit sample-inefficient). To that end, we build on the strengths of off-policy learning to design a novel adversarial imitation approach. Albeit coordinating infamously unstable routines — adversarial learning, and off-policy learning — our novel method remains remarkably stable, and dramatically shrinks the amount of interactions with the environment necessary to learn well-behaved imitation policies, by up to several orders of magnitude. In an attempt to decipher and ultimately understand what made the previous method so stable in practice despite overwhelming odds of instability, we perform an in-depth review, qualitative and quantitative, of the method. Crucially, we show that forcing the adversarially learned reward function to be local Lipschitz-continuous is a sine qua non condition for the method to perform well. We then study the effects of this necessary condition and provide several theoretical results involving the local Lipschitzness of the state-value function. We complement these guarantees with empirical evidence attesting to the strong positive effect that the consistent satisfaction of the Lipschitzness constraint on the reward has on imitation performance. Finally, we tackle a generic pessimistic reward preconditioning add-on spawning a large class of reward shaping methods, which makes the base method it is plugged into provably more robust, as shown in several additional theoretical guarantees. We then discuss these through a fine-grained lens and share our insights. Crucially, the derived guarantees are valid for any reward satisfying the Lipschitzness condition, nothing is specific to imitation. As such, these may be of independent interest.

While imitation learning seems difficult to outperform once the agent has access to past experiences from an expert behaving optimally, the performance of the mimicking agent quickly deteriorates as the expert stray from optimality. Intuitively, it stands to reason that the agent should only imitate another if the latter solves the task (near-) optimally. If not, then imitation is not a well suited approach.

While in the imitation learning setting we had no reward from the environment, we were still able to interact with the environment. In the offline reinforcement learning setting, the situation is reversed. The agent has access to logged interactive experiences from external sources, typically distinct agents. Said dataset of interactive traces is annotated with rewards perceived by the agents upon interaction. Yet, the agent learned via offline reinforcement learning is not allowed to interact with the world, and is therefore unable to witness its own impact on it when trying to make better decisions in it.

The performance of state-of-the-art baselines in the offline reinforcement learning regime varies widely over the spectrum of dataset qualities — ranging from “far-from-optimal” random data to “close-tooptimal” expert demonstrations. We re-implement these under a fair, unified, highly factorized, and open-sourced framework (for which we release the codebase), and show that when a given baseline outperforms its competing counterparts on one end of the spectrum, it never does on the other end. This consistent trend prevents us to name a victor that outperforms the rest across the board. We attribute the asymmetry in performance between the two ends of the quality spectrum to the amount of inductive bias injected into the agent to entice it to posit that what the behavior underlying the offline dataset is optimal for the task. The more bias is injected, the higher the agent performs, provided the dataset is close-to-optimal. Otherwise, its effect is brutally detrimental. Adopting an advantage-weighted regression template as base, we conduct an investigation which corroborates that injections of such optimality inductive bias, when not done parsimoniously, makes the agent subpar in the datasets it was dominant as soon as the offline policy is sub-optimal. To design methods that perform well across the whole spectrum, we revisit the generalized policy iteration scheme for the offline regime, and study the impact of 9 distinct newly-introduced proposal distributions over actions, involved in the proposed generalization of the policy evaluation and policy improvement update rules. We show that certain orchestrations strike the right balance and can improve the performance on one end of the spectrum without harming it on the other end.

In neither of the two studied settings (a) imitation learning and b) offline reinforcement learning) does the agent receive direct reward feedback from the world about the quality of the decisions it makes. It is never told how well it performed, and must infer how well it performed from traces of other policies, which a priori do not align with what the decision maker would have done. In that light, both studied settings can be cast as counterfactual learning, in which sequential decision-making agents must learn how to interact with their world, only from traces that a priori do not coincide with their own. In fine, we are concerned with decision makers that learn from the choices of others. 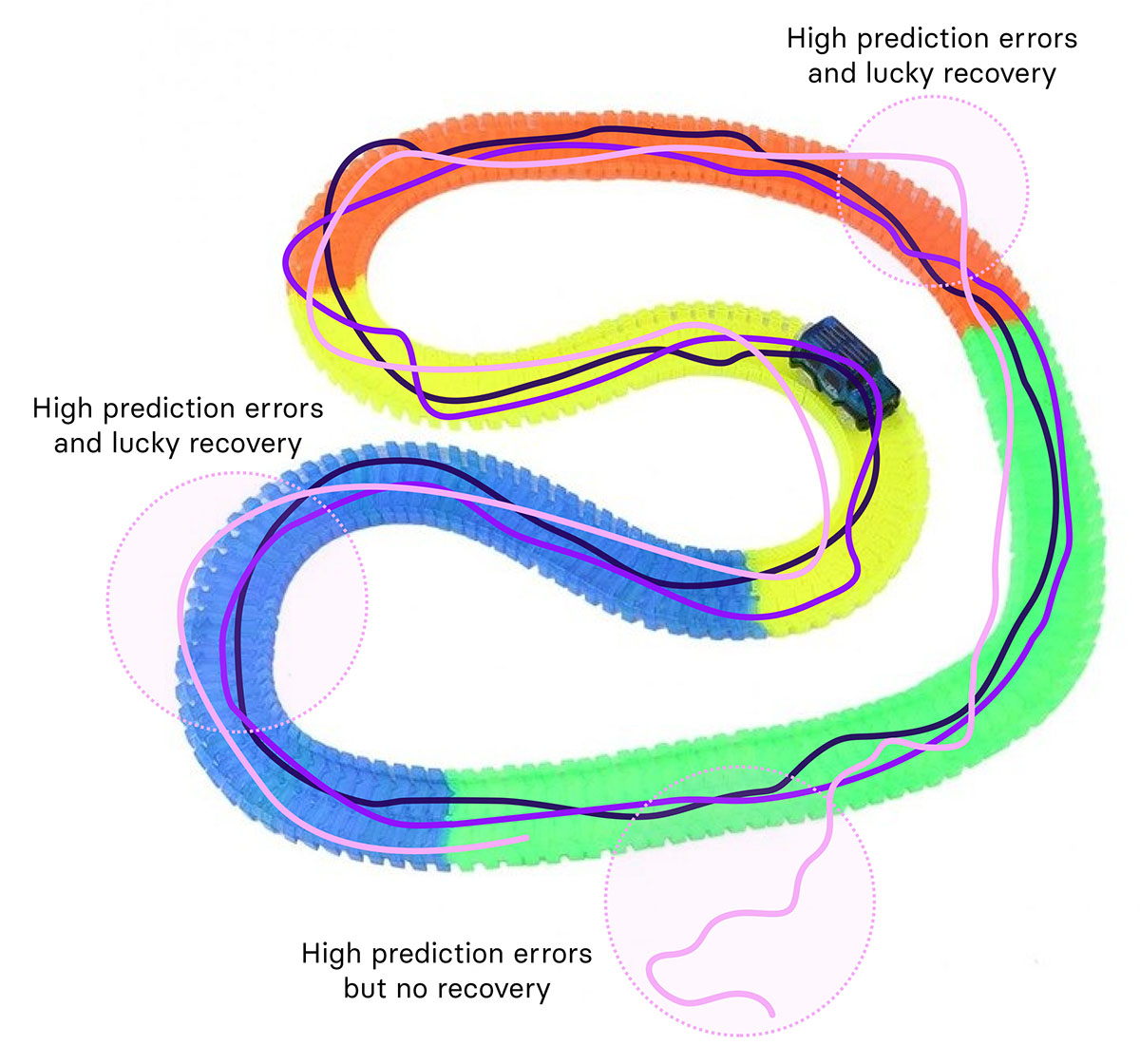